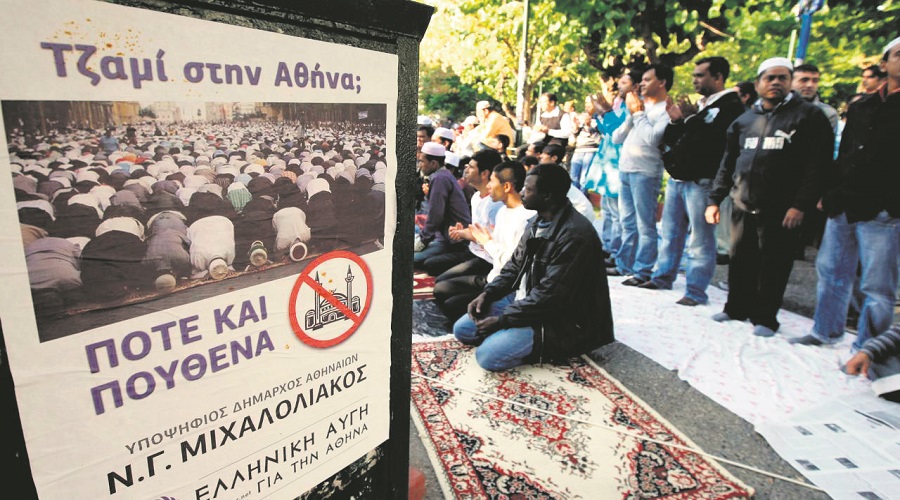 In the present article we will briefly describe the religious freedoms of Muslims in Greece as well as the main problems they face. Problems directly related to the observance of their religious duties and not only.

We should clarify that the references to Muslims do not mean that we refer exclusively to foreigners (refugees or immigrants) but also to natives who belong to the Muslim religion or have converted to it.

Muslims’ religious freedoms are quite limited. In Greece it is allowed to open a place of worship for prayer and gathering of believers with a special permit which is often obtained with unwritten conditions and several bureaucratic difficulties. Within these spaces it is ostensibly allowed to create a religious community of believers with limited activities which are strictly monitored by the state and security forces. This is the only freedom in Greece for Muslims that we have experienced and can document.

Beyond that, the list of restrictions and infringements of basic rights is quite long. Among the main problems are the following:

1. Absence of an Islamic cemetery resulting in believers being buried in remote areas where minorities are located (e.g. the Muslim minority of Thrace). The problems increase dramatically when families are unable to pay the high costs of transportation and burial. 1

2. Systematic sealing of Islamic associations by security forces. Associations that house Muslim communities are sealed under the excuse of not having a «house of worship» permit, even though the statutes of these associations clearly state that they must observe prayer in congregation. 2

3. National security agencies constantly harass Muslims with illegal surveillance and targeting in the name of national security. This creates enormous problems in the daily life of a Muslim religious worker or missionary, as he is stigmatized by these services, resulting in isolation and lack of basic human freedoms. 3

4. Mass expulsions of Muslims in the name of national security without any threat whatsoever. Here we could also observe an oxymoron condition when asylum applications are accepted by real threats from politicized groups and individuals (Muslim Brotherhood etc.). 4

Beyond that, it would be useful to highlight the main sources of Islamophobia in Greece. A Muslim will experience Islamophobia from the following rhetorics :

The political establishment in Greece, for many years now, mainly for electoral reasons, has been targeting Islamic communities and presenting them directly or indirectly as enemies and a threat. Most of the time they attempt to ethno-popularize in a sophisticated way as they know that it is a successful way to manipulate the masses for political interests. 5

Many times some priests of the Orthodox Church propagate inaccuracies about Islam and Muslims in front of their flock. We are not referring to the theological references that are logical to arise and be highlighted, but by comparison we are referring to the targeting of Muslims and how they supposedly threaten Greek society. A typical example is the recent statement by the Archbishop of Athens Ieronymos II of All Greece who called Islam a political «system and not a religion, that aims at violence and war». 6

The Greek media in the list of Islamophobic sources occupy the first place by far. From the Greek news media we constantly observe fake news concerning Muslims and the deliberate highlighting of Islam in order to denigrate the religion, linking it misplaced, to the causes of offending behavior. A typical example is the journalist Nikos Evaggelatos, who described the forced marriage of a 17-year-old girl as an «imposition of Sharia law». 7

We should not confuse the Islamophobic rhetoric of the far right with that of politics in general. The far right has an ideology of presenting Muslims as the enemy because of racist ideas that are not necessarily related to politics per se. The far right’s Islamophobic narrative, beyond the racist element, focuses on presenting Muslims as «Trojan Horse» that supposedly attempts «population alteration». The far right does not stop at propaganda rhetoric but also manifests itself in violence against Muslims. A typical example is the frequent arson attacks on Muslim places of worship. 8

For many it may come as a surprise that the (far) left can stand as a source of Islamophobic rhetoric. We are used to the ethno-populist element presenting the left in general as a «friend» or «ally» of Muslims. And yet, not only is it a source of Islamophobia, it is often worse than that of the far right. The left has completely opposite values and principles to those of Islam and Muslims, so that the propaganda of the left tries to present a «progressive» Islam. In this way they attempt various underground and invisible polemics against traditional Islam (acceptance of homosexuality, feminism, etc.). 9

Geopolitical analysis by various internationalist analysts is one of the main sources of Islamophobia. Many of them engage with Islam, often with a polemical bent, in order to serve various geopolitical and the geostrategic think tanks they advocate (Israeli, Western, etc.). Their analysis significantly influences the mode of perception security forces, who are trained on the basis of these analyses, on how to behave and perceive Muslims and their communities. 10

These are the main victims of geopolitical analysis. Some of them stand not only as victims but also as propagandists. As we had observed and highlighted earlier in my letter to the former Prime Minister of Greece, Alexis Tsipras: The security services as a rule operate on the system of reward and many times in order to gain this reward, some resort to unfair means, disinformation and «inflated» reports just to get the «thumbs up» from their superiors. This is exactly what Muslims stand as scapegoats. Some individuals from these agencies give the impression that they are acting in their petty interests and not in the interest of serving national security. Often as Muslims, especially places of worship, we witness the conflicts (recriminations) they have with each other, which are the result of unfair competition, resulting in us being the punching bag of this conflict.

Some members of these bodies seek to make a career in the name of national security with false and fictitious reports of non-existent incidents. Incidents that are being forcefully dubbed as ‘Islamic’ when in reality they are about gangs and criminal elements. The only one who suffers from all this is the Police Corps and all services in general (NSA, Anti-Terrorism) as it reinforces the further lack of trust in them. As Greek Muslims, as Muslims in general, as citizens of this country, we need serious security bodies that will detect extremism with pragmatism and accuracy, not executives – misinformers whose only concern is the «bravo» of the superior and promotion with reports of bubbles and scaremongering. This phenomenon primarily causes harm to the image and dignity of these bodies. 11

Last, but not least, the Greek school environment is a source of Islamophobia. Many times Muslim students experience alienation and isolation from their own teachers, especially in religious and history lessons. Strong misinformation about Islam and Muslims can be found in these lessons. This is not so much due to the teachers’ beliefs as to the subject matter (Ottomans, Christian theology, etc.)

It is possible that the sources of Islamophobia in Greek society are not so different from those in the rest of Europe, but in Greece things are much more intense, more fanatical and unfortunately more aggressive at all the levels mentioned above.

As Greek Muslims we observe serious violations of religious rights for Muslims in Greece. As far as freedoms are concerned, they are extremely limited and mainly at a level of tolerance on the part of the state, or even, I could say, survival on the part of the Muslim.

In the present article we have made a brief inventory of the freedoms and problems experienced by Muslims in Greece as a religious community. In a future article we will also make a record of the responsibilities of certain «Muslim» organizations that unfortunately feed the monster of Islamophobia and have contributed to the polemics against Muslims

3 In the show «360 degrees» (23,5,2020) on Alpha channel, my statements about the informal mosques, the «official mosque» in Botanico, as well as my questions about the services security (NSS, Police, Anti-Terrorism) https://wp.me/pumwg-NZ

4 The unholy alliance of the Greek authorities with followers of extremist organizations (Muslim Brotherhood), to whom they grant permits for places of worship and at the same time elevate them to institutions, https://wp.me/pumwg-13c

5 The nature of politics is that of demagoguery and populism. He is a professional humanist, professional solidarity or professional patriot. On a personal level, they don’t even care. Everything and anything for them is politics, which believes nothing and at the same time believes in everything, without stable principles and values. They only care about increasing their popularity in the group they belong to and in this political space, there is only one way to increase your popularity, attack Muslims and Islam. https://wp.me/pumwg-11o

6 In the broadcast of the OPEN channel «And Hellas was born», Archbishop Ieronymos of Athens and All Greece, in the context of his television interview on the 200th anniversary of the revolution of 1821 and the role of the church in it, he said the following about Islam and Muslims: https://wp.me/pumwg-X9